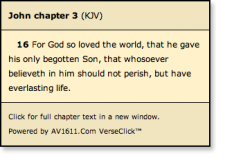 [UPDATED 8-25-12]
Zion Christian Press was born in late 2004 as a vehicle to publish booklets and tracts. The website was added shortly after as a supplement that activity. In recent years the website has become the focus of our efforts with a special emphasis on the Mystery of Israel site for publishing the work of Reggie Kelly. Reggie’s written work is loaded with Scripture references (ex Dt 32:21 or Jn 3:16) which can make for slow reading if the reader stops to check every reference (as every good “Berean” should). Several years ago an excellent help appeared from the Logos Bible Software folks called RefTagger. This tool causes any Scripture reference on a web page to pop up when the mouse cursor was place over the reference. This was certainly God sent and we employed it immediately in Reggie’s material.

Since that time some things have changed in the online landscape (we’ll cover that in a moment) that have caused us to look around for other tools that might be available. This article is simply a presentation of what we have found, so that the search for the appropriate reference “tagger” might be a bit easier for others who are searching.

Out of respect and gratitude for the several wonderful years of our use of RefTagger, let us cover its strengths first. Above all it has superior mark-up abilities. What that means is that a writer will have great flexibility on how he can notate the particular reference he has in mind. We have come to appreciate this more and more as we have experimented with some of the other taggers I will mention below. These other tools have left seemingly legitimate Bible “book” abbreviations un-tagged, that RefTagger has never balked at. This feature can potentially save much work in hunting down references and re-formatting them, and trying to train the writer to use specific abbreviations for future pieces.

Another feature of RefTagger is the ability to offer multiple Bible versions to the reader, but with a “default” version that the website will employ and recommend. It can even force a given verse to display in a particular translation that may not be widely used elsewhere on the site.

With strengths like these what could possibly cause one to re-evaluate the “tagging” landscape? To that question we can give a one word answer: iPad. On April 3rd of 2010, Apple introduced the first mainstream tablet computer with the power, ease-of-use and price to attract the attention of millions of users. Apple reports that it sold well over 14 million units in 2010 [Update: 55 million by Feb 2012; before the release of the 3rd Gen iPad]. What does this have to do with Bible referencing? The iPad has no mouse. Actions are triggered by touch, not the “hovering” of a mouse that RefTagger employs to make its references appear. This innovation “broke” RefTagger for anyone who desired to reach the audiences using the new device. [Update: Reading an Article on Jesus’ comments on the Creation at AiG in 2012 on that same 2010 iPad, I noticed that scripture references that were powered by RefTagger now work with a tap, and dismiss easily with a tap away from the pop-up. This is an improvement over VerseClick (see below). We are not sure if this change in behavior is a result of RefTagger updates, or updates to the Safari browser on the iPad. RefTagger is still limited to a certain small number of words, which usually maxes out less than 3 verses.]

For that reason, soon after the release of the iPad, Zion Christian Press began a simple search to see if any other tools had surfaced in the years since we had incorporated RefTagger into the core of our site. We soon found one called VerseClick. This tool is offered by the AV1611.com website. As you might have immediately deduced, VerseClick does not offer multiple Bible versions as pop-ups. It offers only one. Fortunately however that single offering is the venerable King James 1611 translation that is revered by many as THE premier English translation. In our case, the King James, more often than not, best supports the views on eschatology and prophecy that we have come to embrace.

Over six months ago we began testing VerseClick in a hidden portion of the site that we use for trying WordPress updates, experimenting with new plug-ins, etc. In that testing we found that while not perfect for iPad it was certainly usable. Pop-ups were quick, they could be initiated with a touch, and they could display four verses in the pop-up. This was a great improvement to the 2 to 3 verses that RefTagger could display.

One negative of VerseClick is that the pop-up is not easily removed from sight after initiated with the touch. After reading the verse, the only way to make the pop-up move out of the way of the main article was to find another element or verse somewhere above or below the paragraph you are trying to read to then tap it to over-ride as the pop-up of choice. We have found this to be workable despite some inconvenience. The author of VerseClick, Brandon Staggs, has written that this may be something he is willing to consider at such as time as he can obtain a tablet for testing purposes.

Another drawback is the aforementioned mark-up of references. VerseClick has required that we go back and re-work older posts to use Dan instead of Dn (Daniel) and Ezek instead of Ez (Ezekiel). As far as we have noticed so far, those two specific instances are the only adjustments we have had to make. Additionally we have be aided in those two changes by a Search and Replace plug-in for WordPress. Before we found this Search and Replace tool, Brandon expressed a willingness to look into making the necessary changes to make Dn and Ez work as triggers for the pop-up.

The responsiveness of the author to our emails should be considered another strong point for employing VerseClick. The author is decidedly King James only (and 1611 at that) in perspective and VerseClick will send readers offsite to the AV1611.com site to read larger portions of scripture. While we don’t necessarily share that perspective, we are comfortable enough with it to enjoy the fruits of this hard work.

Just this week, we discovered the NETBibleTagger software that is worthy of honorable mention. From a technical standpoint regarding window and pop-up behavior for touch devices, it is far superior to RefTagger and VerseClick. Like VerseClick, a Tap initiates the pop-up. Rather than the 2-3 verse limitation of RefTagger, and the 4 verse limit of VerseClick, NetBibleTagger can display entire chapters in a small pop-up that can be swiped easily with a finger to advance. We could certainly use this. Additionally, it allows non-contiguous multi-verse selections to be displayed in one pop-up.

Any pop-up can be easily dismissed by tapping the X in the upper right hand corner. That is a huge plus for the “Touch” audience.

Regrettably, NETBibleTagger has a limited set of reference markup that works. Amazingly the Mt tag will not trigger the book of Matthew even though Lk will trigger Luke. We have yet to discover what will trigger 1st Corinthians or 1st Thessalonians (1Cor and 1Thes do not). Acceptable mark-up abbreviations are not easily found on the main promotional web page.

Also, NETBibleTagger only allows the use of the new NET (New English Translation). This is a source of caution as we have not yet read the NET. Every pop-up window largely and garishly promotes the NET. These shortcomings might be overcome by the customizable CSS, but we are not well-versed enough in that technology to make the desirable changes.

All in all, NETBibleTagger has us salivating with the possibilities, but leaves us unwilling to do the work to re-tag hundreds of posts with mark-up abbreviations that trigger the pop-up. And while we understand that it is a promotional tool for the NET translation, we are not familiar enough with that translation to know or trust what might pop up in our readers faces.

In conclusion, for sites that want to reach users of Touch devices we have found only two choices: VerseClick and NETBibleTagger. At this time we prefer VerseClick for it’s solid “known” KJV version and fairly standard markup. We hope that RefTagger and VerseClick will take some technological clues from NETBibleTagger which is so superior in that regard that it almost had us take a risk on an Bible version we have not read.