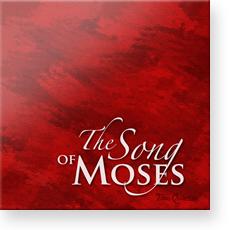 The theme verse of this website has been Deut 32:21 since its inception. A few years ago I asked the Lord for help writing music to the “song” that Moses spoke in this chapter. In more recent months, my friend Reggie Kelly made a comment about the other “song” passage in Exodus that stirred something in me that it might be time to begin work. I am calling that work complete now.

Unlike Psalm 119, which had beautiful 8 verse divisions, I have somewhat arbitrarily divided the song into five sections based on verses that held together musically.

A continuous 5-part video playlist from YouTube is embedded below [approximately 21 min.] Scroll down for audio only downloads:

Below are links to MP3’s of those sections:

I. Give Ear O Heavens

A. His Work is Perfect
B. They have Corrupted Themselves
C. The Lord’s Portion is His People

II. The Apple of His Eye

A. They Sacrificed Unto Devils
B. They have Moved Me… I will Move Them
C. A Fire is Kindled in My Anger

IV. O That They Were Wise

V. To Me Belongeth Vengeance

copyright 2011-2019 Tom Quinlan. Use for profit requires permission. Use for edifying the Lord’s body is granted freely.

The Song of Moses Lyrics
Part I
32 Give ear O heavens, and I will speak;
Hear O earth the words of my mouth;
2 Allow my teaching to fall as the rain,
my words distill as the dew,
like showers upon the tender herb,
abundant rain upon the grass.
3 I will proclaim the name of the Lord,
O praise the greatness of our God!
4 He is the Rock, His work is perfect,
and all His ways are judgment.
A faithful God Who does no wrong,
upright and just is He.
5They have corrupted themselves
to their own shame they are no longer his children
— a warped and crooked generation.
6 Is this the way you repay the Lord
O people foolish and unwise?
Is He not your Father, your Creator
Who formed you and established you?
7 Remember the days of old, consider
the years of generations past.
Ask of your father, he will show you.
Your elders will explain it all to you;
8 When the Most High divided to the nations,
gave them their inheritance
separated the sons of men,
8bHe set the boundaries of the people
according to the number of the sons of Israel.
9 For the Lord’s portion is His people —
Jacob His inheritance.
8b He set the boundaries of the people
according to the number of the sons of Israel
–— the sons of Israel.

Part II
10 The Lord found Jacob in a desert land
a waste, howling wilderness
He led him, instructed him,
He kept him as the apple of His eye.
11 As the eagle stirreth up her nest
flutters over all her young
Spreads abroad her wings
she takes them and bears them on her wings
12 So the Lord alone did lead him
No foreign god was there with him.
13 He made him ride the high places of the earth.
He fed him with the increase of the fields.
He made him to suck honey out of the rock,
Oil out of flinty rock.
14 Butter of kine, and milk of sheep, the fat of lambs and goats, rams of the breed of Bashan;
the finest kernels of wheat.
You did drink the pure blood of the grape
12 for the Lord alone did lead you –
no foreign god was there with you.

Part III
15 But Jeshurun waxed fat and kicked,
filled with food — heavy and sleek
he forsook the God that formed him,
16 Rejected the Rock, his salvation,
provoked Him to jealousy with strange gods,
and angered Him with abominations.
17 They sacrificed unto devils, not unto God:
gods whom they knew not —
gods that newly came up,
whom your fathers feared not.
18 You are unmindful of the Rock that fathered you,
you have forgotten the God that formed you.
19 When the Lord saw this — he abhorred them
Because He was angered by His sons and His daughters,
20 He said, “I will hide My face from them, I will see what their end shall be,
for they are a very perverse generation —
children in whom is no faith.
21 They have moved Me to jealousy
with – that which is not God;
provoked Me to anger with their vanities:
I will move them to jealousy
with – those which are not a people;
provoke them to anger with a foolish nation.
22 For a fire is kindled in My anger,
that shall burn unto the lowest hell
shall consume the earth with her increase,
set on fire the foundations of the mountains.
23 I will heap mischiefs upon them;
I will spend My arrows upon them.
24 They shall be burnt with hunger, and devoured with burning heat, and with bitter destruction;
I will also send the teeth of beasts upon them
with the poison of serpents of the dust.
25 The sword without, and terror within, shall destroy both the young man and the virgin
— the babe with the man of gray hairs.
26 I said, I would scatter them into corners,
I would make the remembrance of them
to cease among men.
27 But I dreaded the taunts of the enemy,
lest the adversary misunderstand
and say — ‘our hand has triumphed
— the Lord has not done all of this.’ ”

The writings of Reggie Kelly probe the foundations of the faith through the lens of the Mystery of Israel (Ro 11:25). We highly recommend this invaluable resource.

Saturday nights at 7PM EST, we go LIVE with our God's Foretold Work Bible Study. Go to our YouTube Channel for it HERE. (Isaiah 46:10)