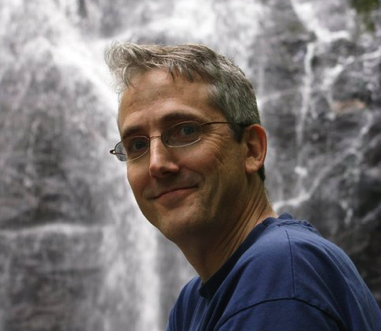 I was raised in Asheville, NC (when it was still a small desirable place to live) by profoundly decent parents. They took my brother and I to a warm (and maybe lukewarm) Presbyterian Church every Sunday. I have great memories of people there, but almost no impressions of hearing the Word of God. (I say almost because years later, after I complained to God as to why I didn’t hear the Gospel earlier, He brought to my remembrance the corporate creeds we read as a congregation. They were powerful in word if not the emotion with which they were read. The Lord particularly reminded me of a thought that I had rejecting a statement like this one- “All we like sheep have gone astray”).

In my early teens I began to listen to secular radio and then to build a record collection of my own. (Billy Joel, Elton John, Chicago, and Bread were some of my favorites). The Gospel meant nothing to me and there was not a single representation of it in my chosen music or hobbies.

I managed to stay out of “trouble”, but that could easily be attributed to a sheer lack of opportunity, since my parents were a very present force in all of those years. When it came time to choose a vocation and a college, I think I made a decision for the University of Cincinnati partly on proximity (8 hours away). The curriculum I chose was Architecture.

It was at this time in Architecture School that I began to feel a great and pressing need for a solid foundation to build my life on. After one paper I wrote, the professor of that class suggested I read the novel The Fountainhead by Ayn Rand. I soon read Atlas Shrugged, an 1100 page novel by the same author that weaved in key concepts of Rand’s philosophy Objectivism, (a man-centered, atheistic, reason-based look at the universe). To give you an impression of how enthralled I was by this, it helps to know that I read that 1100 page novel at least 3 times.

I became rather outspoken with my fellow students. To one, Mike Watkins, I gave a copy of The Fountainhead. He later gave me a leather bound Holy Bible (which I have to this day). However, I did not read it until several years later.

Inspired by the independence of the characters in Rand’s novels, I dropped out of college after two years, thinking that I could work my way up on my own.

At some point, while I was away from home, my mother began to get serious about God. (I need to ask her how that happened. Maybe it was the powerlessness to influence the direction of her sons). This was a source of great aggravation to me, and I actually stopped communicating with my parents for a season.

Being a new believer, my mother was hungry for the Word of God, and was attending numerous prayer groups and Bible studies around the city. I am told that she had all these folks praying for her atheist son. I attribute the rapid disintegration of my atheistic certainty to these prayers, as well as the sighs and groans of my father. It also might explain why I moved back to Asheville in 1982.

I did drafting work as well as goat-farm sitting for a local Architect, and then house sitting for some of his neighbors, including an organic farmer and his family that were into ‘new age’ and eastern religions. I was opening myself up to spiritual things, but specifically NOT Christianity, which I thought I had experienced already. I have memories of being impacted by the 1982 movie Gandhi.

Somewhere in this timeframe, a friend of my mother that ran a local prison ministry asked me to help the inmates with their GED homework on a weekly basis. Wanting to show how nice a person I was, I accepted. Some months later, one or more of the inmates began to pester me about going to one of their Christian services. Again, in an effort to impress men – wanting to prove my open-mindedness – I went. THAT was the beginning of my “demise”.

At my parents church I had heard much good singing of the hymns, but the singing I heard that first night was not good. It was explosive. In the dungy basement Chapel of a 1920’s roach infested prison called Craggy, I heard singing from the heart that totally caught me off guard.

It is not as though I agreed with ANYTHING that they were singing about. It was just that they WERE singing and doing it with passion. There were a few men there that were obviously happier and more blessed than I was, and they would not be going to their homes that night (as I would), if ever.

The people leading the Bible study were not sophisticated men. They were unschooled, ordinary, country people foolish enough to believe that the Bible was true. It was from them that I heard for the first time that Jesus was THE Way, THE Truth, and THE Life and that NO man comes to the Father but by Him. It made my blood boil. How could they be so closed minded?

During this time, I was living with a family that was trying to live off the land by farming organically. They were firmly established in New Age movement and Eastern religions like Taoism. I was doing my best to reconcile what I was hearing in these Chapel services with what I was living during the week.

Months went by and I was getting discouraged with the Chapel services. While the teaching was okay, it wasn’t delivered with enough power to pull me out of the self-centered pit that I was in. At about that time, the teacher was diagnosed with throat cancer and was undergoing testing so he could not speak very long. The person chosen to fill in for him was an inmate by the name of George Holley.

George preached with a power and a charisma that I had not heard before. He was a man who had been broken and ruined by his own sins and put back together again by the Gospel of Jesus Christ. I did not see myself as ruined but unbeknownst to me, I was moving rapidly toward a place where even I would be able to see the tip of that ugly iceberg.

George also took an interest in me, the hippie volunteer that didn’t believe in Jesus. He was an assistant to the Chaplain so he was able to invite me to the Chaplain’s office to talk. At least twice that I remember he spent hours asking me questions about what I believe and then listening to the junk that came out and praising what little he could.

At one point, still living on the farm, and at least one year after the first Craggy service I attended, seemingly still “halting between two opinions” (1 Kings 18:21), I heard a voice in my inner man saying “Go into the wilderness for 3 days and 3 nights and see what I will do for you.” I remember packing up a sleeping bag, an orange, a homemade pita bread and a Bible. I then headed for the mountains on foot via some trails near the farm. It was late winter, but the temperature was quite warm.

I spent much of those 3 days reading through the gospel of Matthew. Though it rained several times, on every occasion I found myself to be near some rock that overhung enough to keep a person dry. On the third day I found myself at a popular public picnic area. Being a winter week day, however, the place was almost deserted. I remember a older couple approaching me to make conversation. They asked me what I did (for a living), and I told them I was a carpenter. This wasn’t my profession, but it was the work I had been doing most recently on the farm. The man then asked me, “Are you patterning your life after another Carpenter I know of?”

I knew he was speaking of Jesus, and to the best of my recollection I said something like “I hope so.”

I remember being very eager to share my experience with George Holley. He was enthusiastic and optimistic, but I think he knew that I had not yet experienced a new birth.

[For this next part, I am going to be deliberately very vague for the sake of others that were involved. If your imagination fills in the blanks for better, or worse, so be it.] I was still living on the ‘New Age’ farm, and up until a certain day, I think I still had hopes of somehow reconciling the best of Christianity with these other ideas. The day I am referring to was when I did something to hurt the man who ran the farm. I had considered him my friend, and yet that did not stop me from taking something that was rightfully his. The frightening thing about it was that I could not see the damage I was doing as it was happening.

When the events of that day came to light, I was asked to leave the farm immediately. This was at night, and I had no car. The only place I had to go was the home of my parents.

As I began a 20 mile walk to their house, shame began to come over me. First it was light, but but as the miles went on it grew and burned through my being. And for the first time in my life, I truly felt a need for a Savior.

In the days that followed I confessed my wrong-doing to Jesus, and gave the mess that was my life to Him. I also told my parents, and George Holley what I had done. A few months later I was privileged to be baptized with inmates at Craggy who were professing Christ for the first time. That was 1984. And my new life in Him was begun.

At some other time, perhaps there will be an accounting of the walk I have had with Him since then.